Posted in General | Comments Off on Video Teaser erschienen 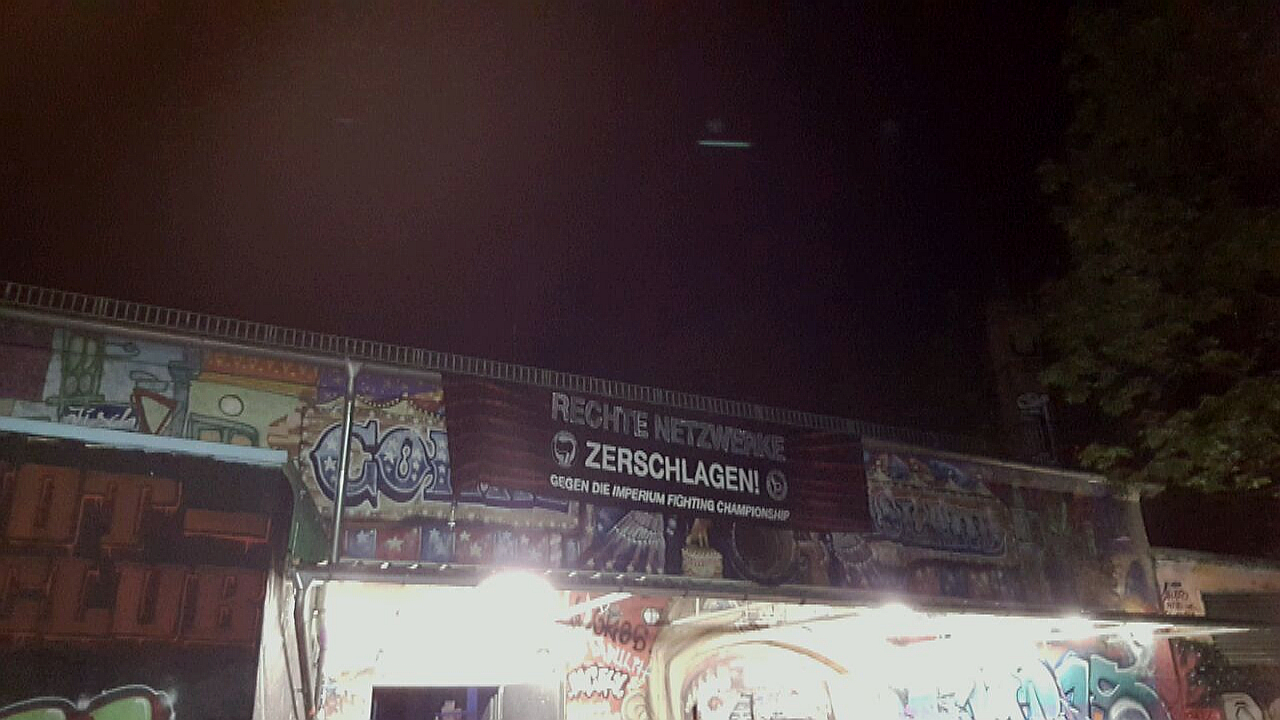 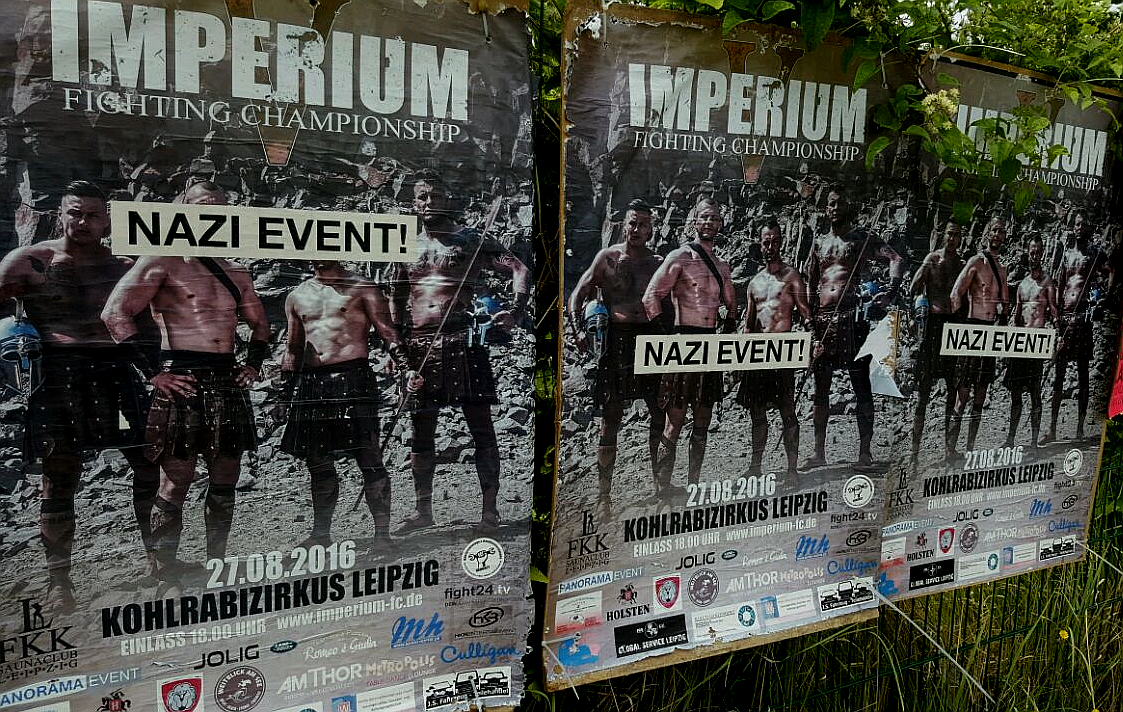 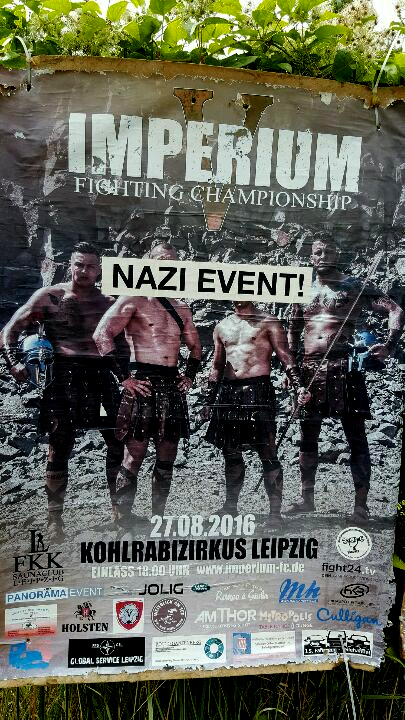 Posted in General | Comments Off on IFC-Plakate ergänzt

Posted in General | Comments Off on Pressemitteilung Nr. 2

Posted in General | Comments Off on Interview bei Radio Blau

On 27th August the fifth „Imperium Fighting Championship“ will take place at Leipzig. Place of the event will be the Kohlrabizirkus in the southern part of the city. The organizer „Imperium Fight Team“ is interspersed with neo-Nazis. Well-known is certainly their coach Benjamin Brinsa. Brinsa was a leading member of the allegedly dissolved right-wing Ultra-group „Scenario Lok“ of the1. Football Club Lokomotive Leipzig.

The „Imperium Fight Team“ isn’t an „apolitical“ sports club, whosemembers are accidentally national socialist acitivists. In contrary: there is a whole neo-Nazi network standing behind the „Imperium  Fight Team“. This network on the one hand successfully merchandises martial arts – on the other hand they are using their martial arts skills for targeted attacks on people. This poses a permanent threat to people of color, LGBTIQ*, left-wing activists and many other people in and beyond Saxony. We especially did not forget the attackon the left-wing alternative district of Connewitz on 11th January 2016.

The failed state Saxony is a homezone to neo-Nazis. While police and justice primarily prosecute left-wing activists and journalists, neo-Nazi gangs try to take law and order in their own hands. Right-wing vigilance committees are acting without any interruption. At the most federal institutions sometimes start prosecution against them. Violent and terrorist such as the „National Socialist Undergrond“ (NSU) or the „Weiße Wölfe Terrorcrew“ (WWT) did not by accident choose Saxony as a place for their infrastructure.

Global capitalism is in a deep crisis and the eastern part of Germany were never successfully integrated into the market economy. Violent clans and gangs with reactionary ideologies are spreading globally. So in the alleged political stable Federal Republic of Germany. Huge parts of the population have no satisfiying social perspective and nowadays it seems more likely to kick downward than to question capitalism. Therefore some people are organizing themselves in reactionary and authoritarian ways.

This social situation is a good opportunity especially for neo-Nazis who want to abolish parliamentarism and democracy to introduce a German „Volksgemeinschaft“. Some of them took advantage of the violent fragmentation of former Yugoslavia and went there as mercenarys to gain combat experience on Croatian side. Afterwards some of them returned to Saxony such as Reinhard R. who could be seen together with NPD and Legida lawyer Arndt Hohnstädter on one of the racist Legida rallies at Leipzig. The latter is by the way also lawyer of Imperium coach Benjamin Brinsa.

Those persons and networks are only a fractional amount of what is known about right-wing networks in Saxony. They stand as an example for the political reality here. Without actively taking over the state or even organizing political majorities, racists and neo-Nazis over and over again manage to establish a right-wing hegemony in parts of Saxony and oll over Germany. By torching asylum seekers’ homes, attacking left-wing activists, attacking migrant stores and murdering people of colour on the street the racists are implementing their political agenda right now. So called no go areas are existing because of right-wing networks which are way bigger than only political associations such as NPD, Die Rechte, III. Weg or AfD.

While the federal administrations policies since the 90’s are based on closing Europe’s borders, right-wing activists especially in eastern Germany organize racist excesses on the streets. Their business networks are the economic base for their political practice.The social subareas where right-wing networks could spread are not neutral settings for political infiltrations. The martial arts scene, security companies, prostitution business, vigilance committees, the rocker scene, the military – all of them are deeply patriarchally structured environments which inherit all necessary foundations of right-wing ideology. They are not neo-Nazi preserves as a whole, but they have to be criticized as sexist, authoritarian and partly racist structures!

The activities of the „Imperium“ network

Let’s have a look at the Imperium network. Imperium coach Benjamin Brinsa is part of fascist structures inside the fan scene of 1. FC Lokomotive Leipzig. This environment also took part in the attacks on Connewitz whilst Legida had a big march in the city center. One of the attackers was one of the two owners of the security company „Pro GSL“. „Pro GSL“ is sponsor of the „Imperium Fighting Championship“. Until the last year „Pro GSL“ was located in 4 Große Fleischergasse in the city center. At this place there’s alsothe „Metropolis Table Dance Lounge“ – also a sponsor of the martial arts event and a meeting point of right-wing hooligans before several Legida demonstrations. Several attacks on antifascists were started from there. Another sponsor is the „Sauna FKK Club“ which is linked to the prositution business.

In the run up to the Legida demonstration in January not only cars of alternative projects were torched. Also the „Kohlrabizirkus“ based martial arts club „8 Weapons Gym“, which publicly supported the protests against Legida, was torched and completely destroyed. The fact that the „Kohlrabizirkus“ rents its rooms to a neo-Nazi network while some months before a non-right-wing gym is burned downon the some place without any traces of break-in, this brings up a lot of questions. Our campaign will raise those questions publicly.

We will take action when neo-Nazis try to terrorize us and we will not stay calm when whole areas are turned into right-wing homezones. Therefore: take part in our demonstration against the „Imperium Fighting Championship“ on 27th August!

Posted in General | Comments Off on Smash racist networks!

Posted in General | Comments Off on Pressemitteilung Nr. 1